The Federation of Saint Scholastica, comprised of 17 Monasteries of
Benedictine Women, was established on February 25, 1922. 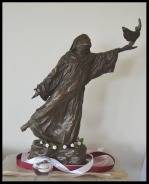 After entering the Mount Community in 1987, Elaine served the Atchison community as an EMT/firefighter. She is currently the community maintenance director and serves on the monastic council. She enjoys working with her hands, carpentry, gardening and bee keeping.

Anne has lived 44 years in religious life. Previously she served her community as prioress. Currently she is Administrator of Health Services at the monastery and one of the community's musicians. Both ministries of health services and music give her life. She loves caring for others and creating beautiful music with other musicians. Being outside in nature is also a favorite past time, which includes, in season, playing golf.

Maricarmen came to monastic life in 1980. She serves her sisters as Prioress in the community. She loves monastic life and the challenges that these times bring. She collaborates in the ETAP (Team of Theologian Advisors to the Presidency) of CLAR (Confederation of Religious of Latin America and the Carribean). She is a member of the COuncil of the Center of Knowledge Management of CELAM (Council of Latin America and Caribbean Episcopate). She also collaborates in the COmmission of Animation of the Women Priority of CELAM-CLAR-CARITAS

Kimberly is a member of St. Walburga Monastery in Covington, KY for 23 years. She serves on her monastery council and as community secretary. Her full time ministry is a Clinical Manager for providers working in school based mental health. Taking time to appreciate the beauty of nature, connecting with others and a good laugh give her life and great joy.

Susan has been a member of the Benedictine Sisters of Chicago since 1988. Over the years she has had the priveledge of being her community's secretary and formation director, along with serving several terms on the Federation Council. After many years working in educational ministries, she is currently Director of Client Services at Comfort Keepers, an       in-home care agency. She loves reading just about anything, walking by any body of water she can find and laughing.

A German native, Andrea came to the USA in 1997. She entered Saint Benedict Monastery in Bristow in 2011 after 25 years in Franciscan life. Right now, she serves as subprioress, canonical treasurer and oblate director. She enjoys creative expression, reading and walking, and just being in nature.

Christine made her monastic profession in 1986. Most of her time in ministry has been serving as treasurer and business manager for her community and for their school. She also served as prioress for 12 years. Christing is back in the treasurer's office and is learning the ins and outs of online everything! She enjoys music of all kinds and plays keyboard frequently for community liturgy.

A professed member of the Benedictine Sisters of Chicago since 1976, Judith currently serves as community treasurer, liturgist and Monastic Council member. Additionally, she works part-time as the coordinator for the Retirement Fund for Religious for the Archdiocese of Chicago and volunteers at Care for Real, a not-for-profit organization serving the less fortunate population of the neighborhood. Previous to her curent work, most of her years in ministry were spent in education, serving as either theology faculty member, international baccalaureate coordinator or principal of St. Scholastica Academy. She also served their community as sub-prioress from 2009-2015.

Lynn came to Sacred Heart Monastery in Cullman in 1981. Her first and long-time ministry was as a lawyer in Cullman, representing children in juvenile court as well as individuals who had been injured in their worker's compensation claims and Social Security disability cases. Some years after beginning law practice, she took a hiatus in order to return to graduate school and recieved her licentiate in canon law. She then returned to law practive and also worked part-time in the tribunal of the diocese of Birmingham and as a canonical cunsultant and advocate for religious. In 2014, she was elected President and has served in that role since that time. In 2018, she was also elected Moderator of Communio Internationalis Benedictinarum. She loves to sing and often serves as contor in her community. 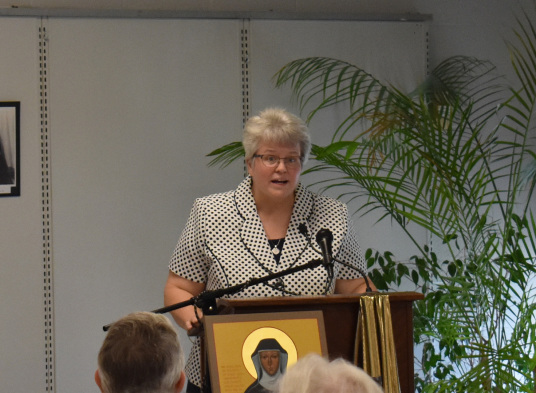 The Monastic Congregation of Saint Scholastica is proud to announce that we have re-elected Sr. Lynn McKenzie as president for the next four years. 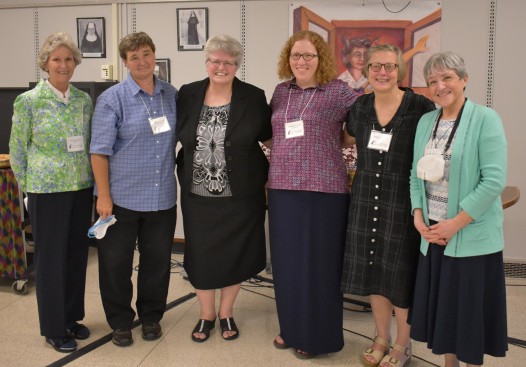 The following is a letter/update from the Benedictine Sisters in Poland about the Ukranian refugees. It is lengthy, but worth the read.

On behalf of the entire CIB Region 7 - Poland, Ukraine, Lithuania - I want to thank you from the bottom of my heart for your prayers, concern and generous support.

Through CIB and AIM USA we have so far received €155,550 and $434,861. We also received a shipment of medicines and bandages organized by Sister Caterina Goergen of Engelthal Monastery.

We use the funds in two ways:

- in Ukraine - by giving money directly to Benedictine communities

We also receive offers to provide shelter for communities of sisters who would like to take refuge from the war. We are very grateful for them and appreciate this gesture of solidarity, but no sister wants to leave Ukraine. The communities that initially evacuated from the war zones to the west of the country are returning to their convents as soon as it becomes possible. The only sisters who came to Poland were those who accompanied evacuated children from orphanages and were their legal guardians.

Thanks to an article in Osservatore Romano, photos of nuns from Zhytomyr taking shelter from rocket fire in the basement of their monastery circulated throughout the world. In early March, the sisters decided to evacuate to their new monastery in Lviv. There, the nuns put practically the entire monastery building at the disposal of the refugees, who at first stayed there only for a short time and continued their journey westwards, mainly to Poland; later only those who did not want to leave Ukraine stayed there - about 90 people. The sisters lived in cells in pairs, leaving only the chapter house for their own use.

A great joy and a sign of new life was starting the postulancy by Iryna - the first postulant in the history of the Lviv-Solonka monastery.

A few days ago 7 nuns returned to Zhytomyr, where fortunately the monastery survived, the rest of the community stayed to serve the refugees in Lviv.

Of course, in wartime conditions the sisters are not able to earn a living for themselves and the people they care for, so they are very grateful for financial help.

Sisters have 11 houses in Ukraine - communities from the eastern part of the country had to evacuate temporarily to the west, those who could stay in the place were engaged in helping refugees and local people. The enclosed letter from Sister Jana Bubel OSB, the Delegate of the Superior General for Ukraine, tells about their fate during the war.

Sisters in Poland (21 houses) - in agreement with city authorities – welcomed people fleeing the war. Moreover, sisters in cooperation with Caritas of the Ełk Diocese send humanitarian aid shipments to Ukraine, which are well-organized and safely reach the most needy through proven corridors.

Benedictine Samaritan Sisters of the Cross of Christ (Poland)

Here is an excerpt from a message from Mother General Anuncjata Zdunek OSB Sam:

We have received Refugees from Ukraine in three houses: in Niegowo - Samaria, in Karwow (Single Mother's Home) and in Pruszkow (Social Assistance Home). We helped about 40 people (mothers with children, there are also elderly and disabled people).

Some of them managed to find a job, also in our institutions. We help them with current issues related to their stay in Poland, obtaining benefits due to them from the Polish State, providing schooling for their children. A big challenge are especially those who are ill: condition after kidney transplantation, juvenile diabetes, heart disease and other current illnesses, which involves seeking specialists or transport to doctors or hospitals. The youngest is a 5-month-old boy whose mother is intellectually disabled.

Thank you for your support on behalf of our Guests in need.

Three monasteries of nuns, which have houses of guests, accepted refugees from Ukraine: Przemyśl, Jarosław and Staniątki.

Our lives have changed radically due to the outbreak of war - says sister Barbara Dendor OSB, the prioress of the monastery in Jarosław - but it is in this situation that we can realize the commandment of love.

Among those fleeing are mainly mothers with children. Some of them spent only a few days in Jarosław before continuing their journey, others remain near the border, hoping to return home quickly after the war is over.

There is also a kindergarten at the monastery which accepts Ukrainian children.

We do not treat them as refugees but guests who have found a shelter with us, a safe place where they can feel good - adds Mother Stefania Polkowska OSB, the abbess of Staniątki. - We know each other by name. With every day we feel more and more like one big family. Of course, by putting the guest houses at the disposal of the refugees, the sisters lost their source of income and they are very grateful for all the support.

Benedictine Nuns of Perpetual Adoration of the Blessed Sacrament (Poland)

The nuns from the monastery in Warsaw have joined the Caritas Poland campaign "Parcel for Ukraine": each parcel weighing about 18 kg and containing food, medicines and personal hygiene products, will provide basic supplies for a family of several people for a week. Sisters want to prepare at least 100 such packages.

Dear Sisters, Dear Benefactors, once again we would like to thank you for your support and concern for our Sisters and those whom they help in war-stricken Ukraine and take under their roof in Ukraine and in Poland. May the Lord Himself be the reward!

We commend to your prayers all those suffering from the war and assure you of our prayers for all your intentions.

Your Sisters from Region 7

I hope that every house in our federation is finding a time and place to regularly pray this prayer this year!

Loving God, we give you thanks
for our Benedictine heritage,
and for the expression of this call and gift in the
communities of the Federation of St. Scholastica.

May our celebration
of the Federation's first 100 years
strengthen us in our spiritual tradition,
deepen our capacity to listen,
widen our hearts with your love,
and sharpen our spiritual vision
that seeks to see Christ in the heart of all Creation
and at the center of our common life.

One in Christ,
may the communities of the Federation,
oblates, benefactors, and friends,
share the peace of Christ,
show the love of Christ,
and make Christ known in our world.

The Federation of St. Scholastica will celebrate 100 years in 2022. As a means of sharing Benedictine life as a vision unfolding, the Federation is offering a multi-featured website to share our life and values. Click here. Be sure to sign up to receive alerts when new content is posted. 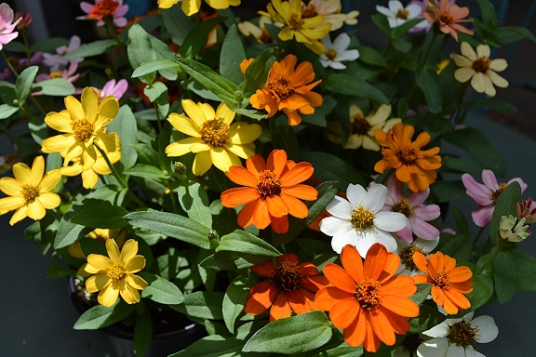 If you have any difficulty registering, please contact the webmaster, Sister Suzanne Fitzmaurice, and she will get you signed in directly.

Association of Benedictine Colleges and Universities